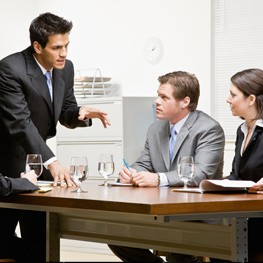 A GD is a methodology used by an organization to gauge whether the candidate has certain personality traits and/or skills that it desires in its members. In this methodology, the group of candidates is given a topic or a situation, given a few minutes to think about the same, and then asked to discuss among themselves for 15 – 20 Minutes and place their opinion on the topic.

Group Discussion Test is the most important and most popular technique of personality testing.It is used for selecting candidates for MBA, SSB, Airlines, Bank officers, Research scholars, Call Center etc.It enables the examiner to assess candidate’s leadership ability, intellectual level, communication ability, socialization skill and an ability to motivate and influence others. The most important aspect of Group Discussion is its practical approach for analyzing the inner orientations of the candidates.The enhanced leadership ability of the candidate has to be in context of abilities and responses of other individuals of the group.

Some of personality traits the GD is trying to gauge may include:

Initiative | Assertiveness  | Flexibility & Creativity | Ability to think on ones feet

GDs can be Topic based or Case based :

Topic based Gds can be classified into three types :-

Factual topics are about practical things, which an ordinary person is aware of in his day-to-day life. Typically these are about socio-economic topics. These can be current, i.e., they may have been in the news lately, or could be unbound by time. A factual topic for discussion gives a candidate a chance to prove that he is aware of and sensitive to his environment. E.g. The education policy of India, Tourism in India, State of the aged in the nation.

Controversial topics are the ones that are argumentative in nature. They are meant to generate controversy. In Gds’ where these topics are given for discussion, the noise level is usually high, there may be tempers flying. The idea behind giving a topic like this is to see how much maturity the candidate is displaying by keeping his temper in check, by rationally and logically arguing his point of view without getting personal and emotional .E.g. Reservations should be removed, Women make better managers.

Abstract topics are about intangible things. These topics are not given often for discussion, but their possibility cannot be ruled out. These topics test your lateral thinking and creativity .E.g. A is an alphabet, Twinkle twinkle little star, The number 10.